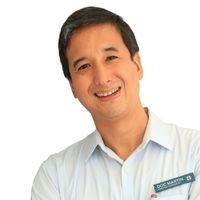 Dr. Camara is a Chiropractic Specialist, Director of Clinics, and Chief Executive Officer at Intercare Chiropractic Center. He serves as a member of a multitude of national and international organizations. Most recently, he was chosen as a Development Group Member of the World Health Organization for Low back pain as a part of their ‘Rehabilitation 2030’ initiative. On top of that, he is a member of the Department of Health and National Certification Committee on Chiropractic of the Philippine Institute of Traditional and Alternative Health Care (PITAHC), at which he is a presidential appointee on the Board of Trustees.

He is a clinical excellence awardee from Palmer College of Chiropractic-West in 1993 and was instrumental in setting up the registration process for Chiropractic in the Philippines.

BOARD MEMBER – Philippine Institute of Traditional and Alternative Health Care (PITAHC) Department of Health, Republic of the Philippines

MEMBER OF THE BOARD OF STUDIES – 2001-2009 – Master of Clinical Studies International Medical University Kuala Lumpur, Malaysia

Board Certified 1993 – The National Board of Chiropractic Examiners, U.S.A.

The first Chiropractor in the Philippines trained in the Graston Technique (GT), a scientifically-advanced instrument- assisted method to treat soft tissue injuries, used by professional sports teams, universities and healthcare institutions in the U.S.A.

ACHIEVEMENTS
Presidential Appointee – 2004 – present – Member of the Board of Trustees of the Philippine Institute of Traditional and Alternative Healthcare (PITAHC), Philippine Department of Health (DOH)